Posted on October 17, 2018 by paperbacksandpugs

‘If we catch that bastard, this time we’ll tear his balls off!’

Mad Foxes is a film about turning the other cheek. If any of the protagonists had just been the bigger person and backed down, then a lot of carnage could have been avoided. It never happens though, because on one hand we have a Nazi biker gang, who are not known for their merciful nature and on the other we have Hal, our ostensible hero who is a revolting asshole. 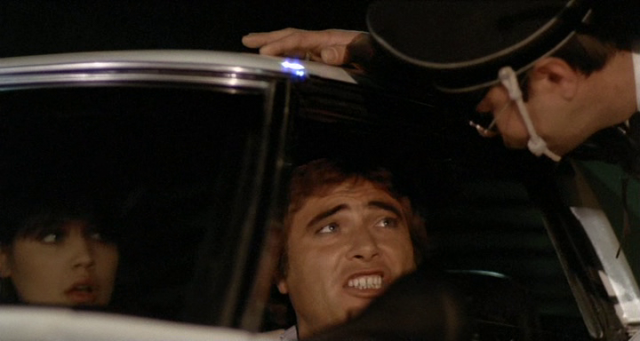 Mad Foxes immediately ingratiates itself to me by opening with a POV shot from a car whilst Swiss heavy metal legends Krokus sing about being an Easy Rocker. The expensive sports car/phallic symbol belongs to Hal, who is impossible to like.

Now, to be fair, the Nazi bikers start the whole thing by asking Hal to stop kissing his girlfriend (who has just turned eighteen!). Hal refuses and the biker spits in his face, before inexplicably driving straight into a car and dying. It’s not really Hal’s fault, although the bikers follow him and his jailbait (who’s called Babsy!) to a fancy bar, where they rape Babsy and beat up Hal. This is probably the sickest scene in a film that wallows in depravity – one biker sticks his fingers into Babsy and pulls them out covered in blood, which he smears on her face before raping her. 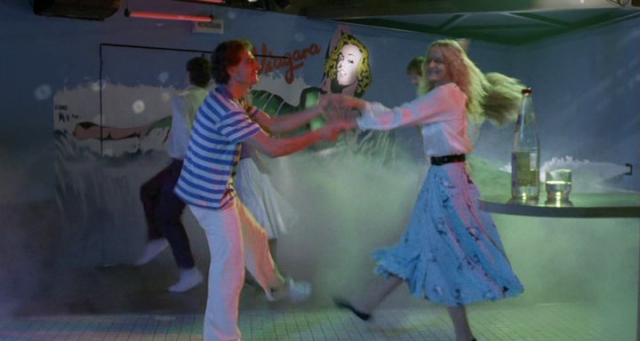 Babsy is never heard from again, though Hal says she is in hospital. Instead of sitting by her bedside, Hal phones his karate expert friends and together they launch an assault on the amphitheatre where the bikers are cremating their friend. 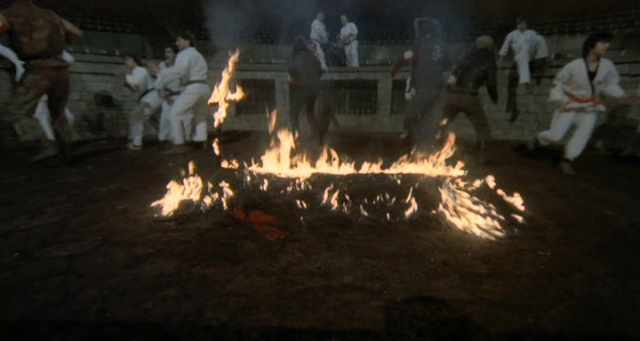 There’s a funny/awful karate fight around the smouldering corpse and then the lead biker gets his dick cut off and stuffed in his mouth, and Hal heads home to sleep with a nude woman who is waiting for him in bed. This woman is not Babsy. I guess Hal can’t be expected to wait for his eighteen year old girlfriend to recover from her rape before getting his end away.

Like I said, things escalate quickly in Mad Foxes.

The bikers launch a counterattack and blow up the karate school with a grenade, machine gunning the survivors. One guy threatens to cut someone’s neck off, which doesn’t make any sense. They go to Hal’s apartment where Hal, wearing white jeans and a tank top like some kind of asshole, leads them on a keystone cops style chase through the streets.

Guys, we are only thirty minutes into the film. From hereon in, it’s a constant game of oneupmanship between Hal and the bikers. Hal picks up a hitchhiker and takes her home to meet his family(!?) and the pair have sex in the most disgusting looking yellow bathwater I’ve ever seen.

Can this guy not just keep it in his pants for five minutes? Maybe go and visit Babsy, you sick bastard. Soon, Hal’s whole family is dead and he is hunting down the remaining bikers like a yuppie Rambo, saying dumb things like, ‘Don’t you have a little knife with you? I’d like to slice your prick,’ and dropping grenades down toilets. 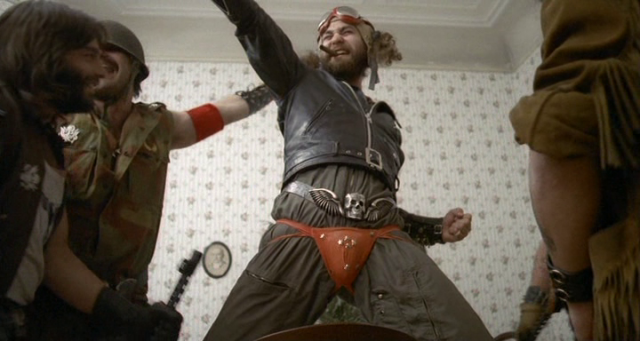 As far as exploitation films go, they don’t come much crazier than Mad Foxes. It’s in no way a good film, but it sets out to shock, awe and titillate and it achieves that with admirable aplomb, which is more than can be said for some films on this list. And in Hal, we have the most unlikable lead character in any Nasty, which is an achievement in and of itself. The best Hal moment reminds me of Mark from Inseminoid and his stubborn refusal to listen to what people are actually saying –

‘Hal! There’s a man in there and he says he’s going to kill all of us! He’s got a bomb and he’s going to blow up the whole building!’

‘But what are you saying?’

Jesus Hal, could she make it any clearer? Oh Mad Foxes, you truly are a one of a kind.