Posted on April 7, 2017 by paperbacksandpugs

Ruggero Deodato’s Cannibal Holocaust (1980) is one of the most divisive films in the history of horror. The lurid mixture of sensational screen violence and real life animal cruelty creates a pungent masterpiece that is both reprehensible and astonishing, disturbing and fascinating.

Almost 25 years later, we finally got the long awaited sequel, Mondo Cannibal aka Cannibal Holocaust: The Beginning.  It’s directed by Bruno Mattei, the Italian schlockmeister that gave us Rats: Night of Terror and Hell of the Living Dead. Was it worth the wait? 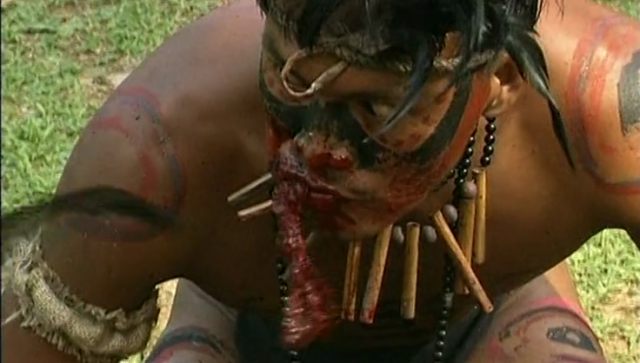 No it most certainly was not. 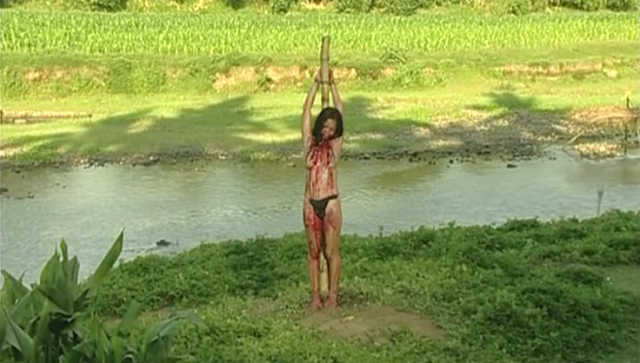 Cannibal Holocaust 2 is shot on a consumer level camcorder and plays out like your most nightmarish home video fantasies come to dreadful, gasping life. It shamelessly cribs the plot and entire scenes from the original, but only after carefully excising any semblance of power, wit or intelligence from them.

What it does offer, however, are some of the greatest facial expressions ever captured on tape. But first, a warning from our lead character, Grace –

‘What you are about to see, will, I imagine, send you out of your minds.’

You have been warned. 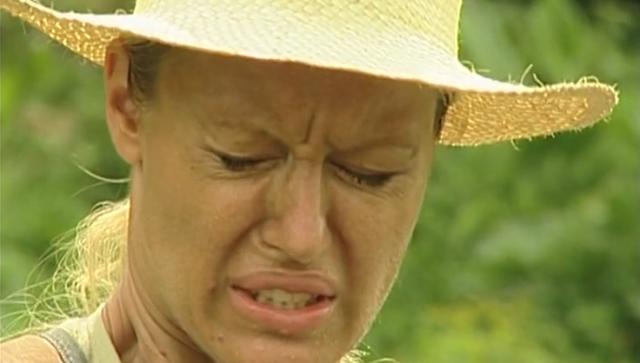 Guys, these three frame grabs are from the first two minutes. The reason for their repulsion is that a native woman is having her intestines pulled out of her through her breasts(?). Don’t even ask how that works – anatomy is not Mattei’s strong point.

Sadly, neither is filmmaking. Despite nominally operating in the same Found Footage milieu as Deodato’s film, Mattei can’t even commit to that film’s two camera set up, constantly cutting to shots that couldn’t possible be being filmed by the camera operators.

But that, my friends, is the least of the films problems.

We are quickly introduced to our protagonist, Grace Forsyte, who has the longest arms I’ve ever seen on a person.

We know Grace is a badass, because as she walks the streets of Hong Kong, limp porno-sax plays out over a Casio drum beat. She soon discovers that her tv show has been temporarily suspended.

‘Temporarily suspended? What the hell is that supposed to mean?’ she demands. Erm, do I really need to explain it to you, Grace?

Grace is furious with the ‘powers’ from ‘administration’, and calls them every name in the book, and even some that aren’t in the book, because she just made them up.

Soon, she meets up with Bob Manson and ‘the old squad’, a motley collection of halfwits who always look like they’re posing for their bands first album cover. 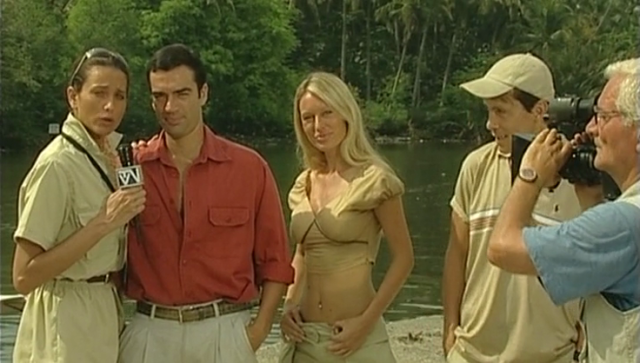 You see, in a pathetic concession to topicality and the ideas of the original, Grace is told that the war in Iraq has awakened a bloodlust in the public that must be satisfied. Therefore, Grace and her merry band of idiots head out to try and find proof of the existence of cannibalism.

It’s a dangerous mission, but luckily there is still time for some topless sunbathing.

Grace continues to demonstrate her way with wicked one liners, my favourite being, ‘Hope doth spring eternal, you bastard.’ I’d like to get that on a shirt. Later, when they find their first evidence of cannibalism, she says, ‘All our stomachs are jumping like palsied butterflies.‘

That one I don’t need on a shirt, thanks very much.

Along the way we get some stock footage that also turned up in Mattei’s Hell of the Living Dead and also, with crushing inevitability, the real life animal violence that seems to go hand in hand with this frequently loathsome genre. It seems even more bizarre and depressing coming from a film shot only a few years ago in 2004, and isn’t able to use the tired defence of ‘oh, but it happened so long ago! Things were different back then.’ 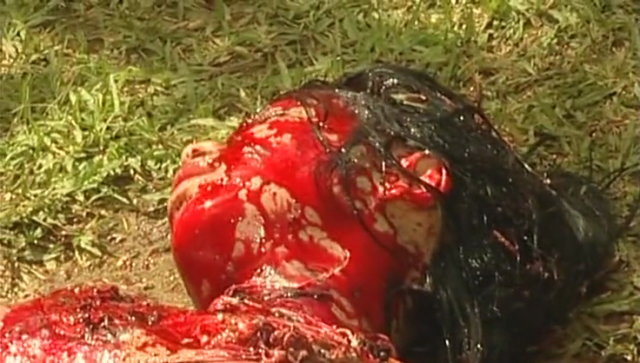 Luckily, Grace soon gets us back on track by getting in a catfight with her camerawoman, causing them to roll around in the dirt while the men stand around laughing, as men do. 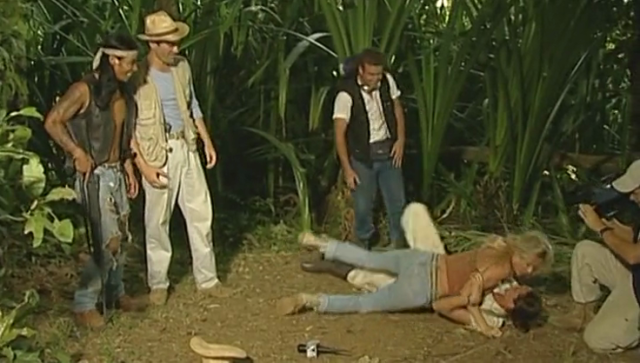 But goofball moments like this are becoming few and far between, and the ugly image and painful dubbing are starting to take their toll. I need some action. I need some excitement. I need…Grace grabbing a cannibal in a headlock and wrestling her to the ground! I need…Grace kneeing a cannibal in the head! Love her or hate her (I hate her), you have to admit that Grace consistently delivers. I can understand why she is ‘the host of thousands of successful programs.’

Wait…thousands? That’s a lot of programs.

After that highlight, the film plays out like Cannibal Holocaust’s devastating climax minus the devastation, wimping out on all the extreme violence and horrifying imagery. Apparently it’s okay to slice open a lizard on camera, but chopping a fake dick off is just bad taste and has to happen offscreen.

It all ends in the most extraordinary, inexplicable fashion. The old squad is dead, but the tv execs decide not to inform the public of their deaths. Instead, one of them explains that, ‘Avant garde virtual techniques will enable the audience to find them.’ Sorry, did I say explain?

But let’s end on a high. Here’s another topless sunbather along with the most outrageous mangling of a well known phrase in the history of language.

‘Hey, remember what they say about pigs claiming to be able to fly?

You look up long enough and you’ll get pig shit on your face too.’